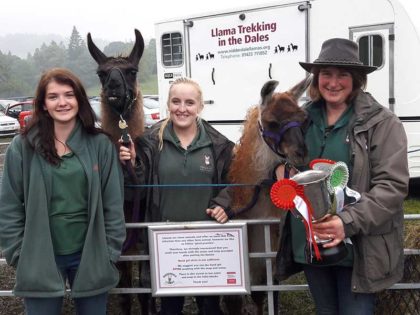 Suzanne and James Benson own and run Kiln Farm, Nidderdale, with their 3 sons. In April 2009 Nidderdale Llamas was set up as diversification of the farm. The business is run and managed by Suzanne who deals with everything from marketing, administration, animal management and of course trekking!

The animals are all well cared for and welfare here is our priority. We do not let our animals be over petted, become stressed or over worked. When working with large groups we have to plan a rota for the animals so they don’t become tense and each get quiet time to themselves.

We are a friendly team who enjoy our work, make visitors feel very welcome and of course take enormous pride in our farm and our animals! We endeavour to make your visit special and personal to you.

As all treks and experiences have to be pre-booked we can assure you of no queuing and receiving personal attention to make your visit, trek or party a very memorable experience!

The farm was originally sheep, then in 2003 goats, hens, ponies and then a llama was introduced! Not knowing anything about llamas, the couple became intrigued with the llamas unique nature and habits, therefore went on to purchase a breeding pair. Within a year the llama herd had increased to four! Over the next 5 years two more cria were born and Suzanne went on to research camelids and their uses.

Although working full time as a Housing Manager and having 3 children to raise, plus helping out on the farm, she was determined to eventually re-place her day job with a full-time business run from the farm. During this time James had been very ill which took its toll on the family. After a lengthy spell in hospital and life saving operations, he is now able to carry out things he enjoys but not to the full extent he used to. Suzanne, undeterred by the circumstances undertook some market research around the local vicinity in terms of setting up a llama trekking centre and was pleasantly surprised with the results. In February 2008 the decision was made to go forth and develop a trekking centre!

March 2008 saw the arrival of Harry, Morgan & Ike bought from Catanger Llamas in Northampton. Harry & Morgan were both fairly experienced trekkers and Ike a youngster with great promise. In April that year baby Ted was born at Kiln Farm a bonus to their breeding since producing 3 lovely females, but really wanting a male as an eventual addition to the trekking group.

Over the course of 2008, Suzanne remained working full-time, but due to a real desire to make this project work she and James put in lots of hard work and long hours into setting up the trekking centre. The llamas had to become familiar with their new surroundings and Suzanne also had to learn about their characters and get to know them fully. Facilities for customer had to be adequate, trekking routes re-searched, linking to the local community, sourcing local providers for food provision and services and of course building on her knowledge regarding Nidderdale where she was to trek!

April 2009 saw the final touches and the doors opened to the first customers! Since that date the business has continued to grow and has become stronger and busier much faster than initially anticipated. Suzanne was able to say goodbye to the day job and is now permanently on the farm living her dream! (although she won’t pretend it’s all roses)!

The herd now stands at around 90, including llamas and alpacas. The centre also offers employment to local people, which has been a bonus to the rural economy. Community Links are strong and the business now brings in extra trade for Pateley Bridge as customers travel from all over to visit. Overall a happy establishment has been created and hopefully will continue to build on its current success as plans are now being made to link into education and health organisations.