We thought we would post a little update on the infamous Freddie. If you have already met Freddie at our farm then you will know what he is like, but for everyone who hasn’t….Freddie is a VERY naughty llama, and has caused some trouble in his time at Kiln Farm. He likes to do thing like jump over walls and escape from his field, or get a bit big for his boots and try take his humans for a walk on a route of his choice. Don’t get us wrong, he isn’t dangerous or nasty….he is just extremely cheeky and loves to run rings around us! He does go out on treks but he definitely isn’t the right llama for people who are nervous.

Well the good news is he is being a lot better behaved, although he still has a long way to go until he loses his ‘naughty boy’ title. We have recently put a pack on him and he took it rather well. We hope that the responsibility of carrying a pack will give him something to focus on, and he will start taking his job seriously. He has also been on a few more treks with customers and been a good boy! He definitely takes a bit of bossing, but after a few firm words he generally gets the message. We think he will always be a cheeky chap, that’s just Freddie. But if he continues to progress in the way that he has, it wont be long before he is being used regularly for treks! 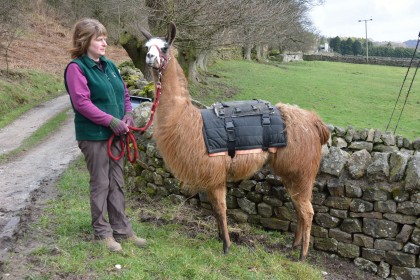